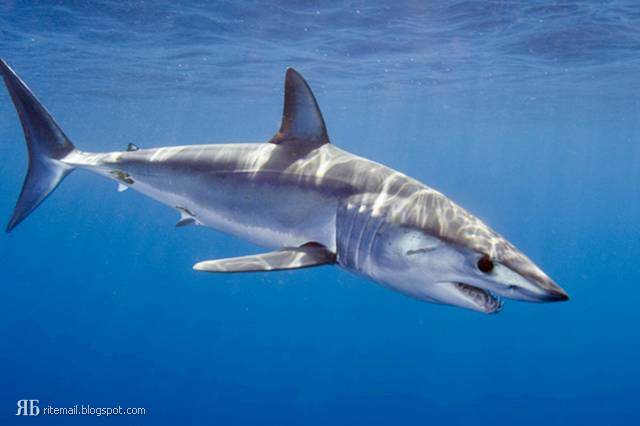 01. A shark does not have one bone in its body.  Its skeleton is made up of cartilage.  Cartilage is a tough material, like the material that shapes your ear.  12 More facts after the break...
02. The Swell Shark, found in New Zealand, barks like a dog.
03. Weird things have been found inside a shark, such as a nail, a bottle of wine, a treasure chest, coats, a suit of armor, a drum and a torpedo.
04. A shark's skin is covered with denticles, which are small, razor-sharp teeth.  Denticles can be removed from a shark's body.  After the small teeth are removed, the remaining skin can be made into very strong leather.  A pair of shoes made from shark leather can last up to four times longer than shoes made with cowhide.
05. Sharks have very good senses.  Sometimes a shark is called "a swimming nose", for its great sense of smell.  Sharks can easily detect prey that is in the sand, as well as at night.  A shark also has a remarkable sensitivity to vibrations in the water.  It can feel the movements made by other animals that are hundreds of feet away.  They can hear sounds from thousands of feet away. Sharks can tell the direction from where the sound is coming from, too.
06. Sharks cannot eat Puffer Fish, because the Puffer Fish inflates like a balloon and pokes the shark's mouth with its sharp needles.
07. Most sharks give birth to their babies.  Only a few sharks lay eggs.  Most sharks have six to twelve babies at a time, but ..... read full from www.malabarfriends.tk ->blog

A friend indeed a friend with..........
www.malabarfriends.tk